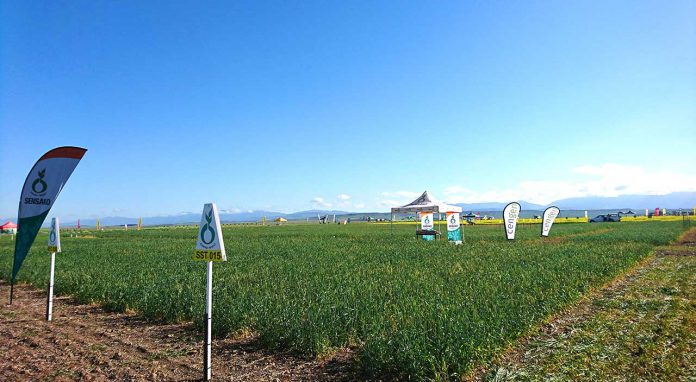 The annual SSK Winter Grain Day hosted in conjunction with Joubert Boerdery and the Western Cape Department of Agriculture at Uitkyk, Riversdale, is an event that attracts many visitors. On 22 August, producers had the opportunity to attend talks on current topics such as land reform and visit trial sites to learn about new wheat, canola, barley and cover crop varieties as well as advances in agricultural practices.

Driecus Lesch, spring wheat breeder at Sensako, invited CenGen to join him at the Sensako calling point at their field trial to explain to the visitors how marker-assisted selection (MAS) enhances a wheat breeding programme. At CenGen, MAS is routinely performed for the South African wheat breeders of PANNAR and Sensako in a programme funded by the Winter Cereal Trust, namely the Molecular Service Laboratory (MSL) programme. Elsabet Wessels and Marizanne Horn (molecular breeder at Sensako) briefly explained the process of genetic data generation and demonstrated how this data is integrated with field trials to accelerate the movement of promising lines through the breeding programme to release well-adapted cultivars to the producers.

The value of MAS in Sensako’s spring wheat breeding programme was highlighted earlier this year when one line was advanced from single plots directly into performance trials – skipping Elite 2 and Elite 3 trials in the process – due to the exceptionally good yield that it has. This line also contains genes/QTL for stripe and stem rust resistance which were identified by applying linked molecular markers in the MSL programme at CenGen. By combining Sensako’s doubled haploid programme with the MSL programme, at least 5 years were deducted from the time it will take to advance this germplasm to releasing a cultivar.

CenGen enjoys seeing how the work that they do on the lab bench gets transferred to the wheat fields next to the road and how it has a positive impact on the agricultural industry. They feel privileged to be able to work with the wheat breeders to complement their breeding programmes with genetic marker technology. CenGen would like to thank Driecus for providing them with an opportunity to engage with the producers and to share the work that they do with them.